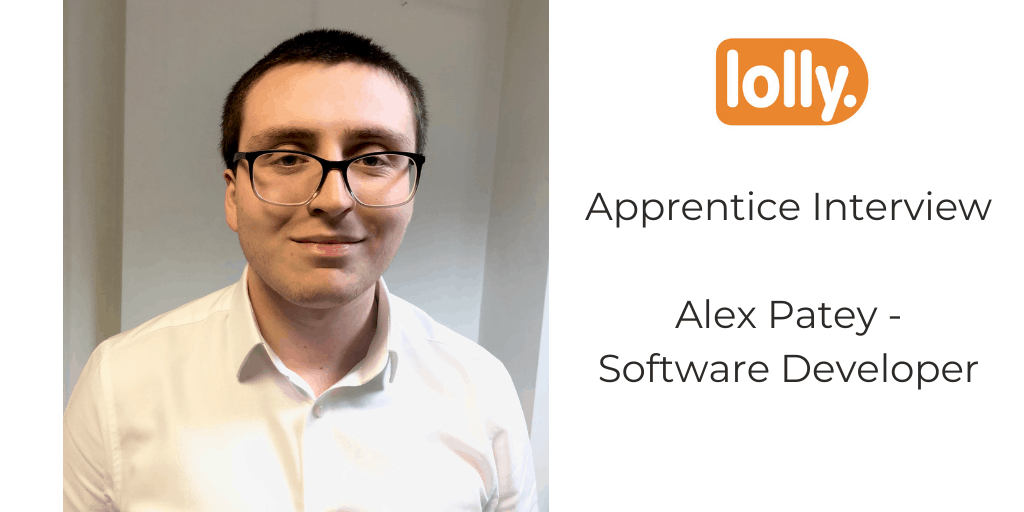 Digital commerce business It’s Lolly has been actively involved with apprenticeship schemes for the last five years. The company’s latest apprentice, Alex Patey, who joined the team two weeks ago, shares his thoughts and experiences of being an apprentice.

Why did you choose to do an apprenticeship?

I decided to do an apprenticeship because I was interested in working on projects that would have an actual impact on peoples’ lives. Moreover, I felt that gaining experience and developing my skills as a software developer would be best achieved through an apprenticeship, as I would be learning ‘on the job’.

What were you doing before your apprenticeship?

Before working at Lolly, I was studying and completing my A-Levels, which included Maths, Computer Science and Graphics.

How did you get your apprenticeship with Lolly?

I got a placement at Lolly through a training provider. They sent my CV to Lolly as they were looking for a new Software Developer apprentice. I was then interviewed by some of the management team, a process which included two face-to-face interviews, including an initial interview with a programming task to complete. This was great first-hand experience in terms of the interview process and what it entailed.

Why did you choose to work for Lolly?

I chose Lolly as I was really interested in their business and the software they create. In particular, I was interested in a new piece of technology they have which scans food trays using AI. This technology can then determine what food is on the tray and how much the food costs. It’s like the next generation of hospitality; they are one step ahead, and it’s invaluable learning for me.

What does your job involve?

My job includes stress-testing Lolly products, to find bugs or errors within the software. Later, my role will also include writing code for software behind Lolly’s products; howeveras I am new, I am still learning the programming language. The role also includes participating in developer meetings to discuss problems that developers are facing regarding code, as well as ideas for future implementations.

Have you faced any challenges so far?

I haven’t faced too many challenges at the moment, as I have mostly been familiarising myself with Lolly products and learning code.

What do you enjoy about working at Lolly?

My favourite part of working at Lolly is being able to choose when to complete each task, and being able to organise my day how I would like. I can already see that no two days will be the same, and I could never be bored.

Do you have any hobbies?

In my free time I have recently started painting, using traditional paints like oils and acrylics. I also have my own website, which hosts some programming projects that I have built in my free time. Outside of that I like to listen to music and socialise with friends.